Accessories After the Fact: The Warren Commission, the Authorities & the Report on the JFK Assassination

A Comprehensive Guide to Using the Apple Watch Series 6 and SE: A Concise User Manual for Beginners and Seniors with Pictorial Illustrations

Cricut: Four Books in One: Cricut for Beginners, Design Space and Project Ideas + Accessories and Materials. A Complete Guide to Mastering Your Cutting Machine With Illustrated and Practical Examples

The true story of Andersonville prison : a defense of Major Henry Wirz (1908)

Added to wishlistRemoved from wishlist 0
Add to compare
$9.95 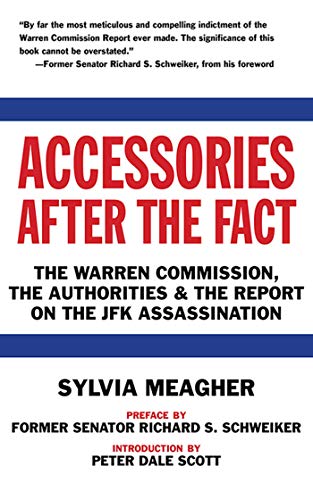 Originally published in 1967, Meagher’s masterful dissection of the Warren Report, based on the Warren Commission’s own evidence, has stood the test of time. In some cases, declassifications of government records have corroborated the author’s suspicions and analyses, such as her amazing assertion that Oswald had never actually been charged with Kennedy’s murder, despite sworn testimony to the contrary. Meagher’s book raises serious questions not only about Oswald’s guilt in the JFK assassination and related crimes, such as the Tippit murder and the Walker shooting, but also about the methods and honesty of the Warren Commission, the FBI, and various Dallas police and other officials.

When the Church Committee first began to re-examine the Warren Commission and its relationship with intelligence agencies in 1975, investigators were shocked by what they discovered. In Accessories After the Fact, Sylvia Meagher delivers a blistering blow to the credibility of the Warren Report, and decades after its original publication researchers and readers are still discovering what made her work so important.

Be the first to review “Accessories After the Fact: The Warren Commission, the Authorities & the Report on the JFK Assassination” Cancel reply

Accessories After the Fact: The Warren Commission, the Authorities & the Report on the JFK Assassination